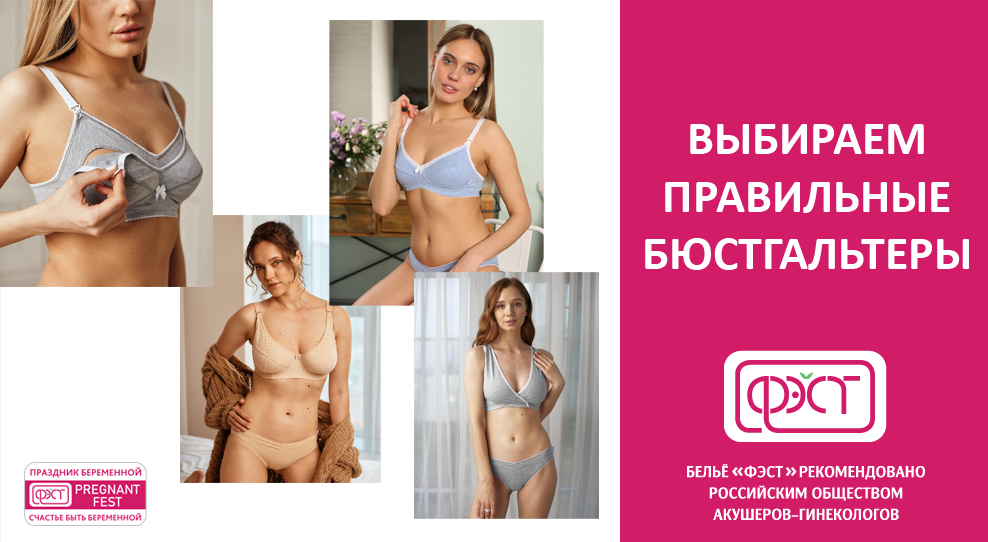 What to look for when choosing a nursing bra? There are a lot of options, but how to choose the one that is right for you?

It is recommended to buy a postpartum bra starting from the 7-8th month of pregnancy: at this time, the breast size is as close as possible to that which will be established with lactation. It is no secret that with its onset, you will be able to boast of more magnificent forms, especially before the “meal” of the baby. It is often advised to purchase a nursing bra for the first time breastfeeding, since the breasts still vary in size and it is difficult to determine the exact cup size. The top will provide good enough support due to the wide back and straps, the density of the material. Due to the absence of seams in the chest area and fasteners at the back, the top is well suited for sleeping and night feedings of the child, as well as for increased sensitivity of the mammary glands during the start of feeding.

Particular attention should be paid to the design of the bra when choosing. Sealed push-up cups are not recommended in the first months after childbirth: they not only impede air exchange, but also squeeze the mammary glands, which can lead to unpleasant consequences — stagnation of milk and, subsequently, to mastitis. The most delicately support the chest are models of FEST bras with a soft cup. They easily adjust to size fluctuations during milk flushes. The assortment of TM «FEST» also includes models with molded cups: they look spectacular and fit «out» — under a dress, blouse or tight-fitting clothes.

If you have large breasts and are accustomed to more serious support, before pregnancy you chose lingerie with underwire, the FEST nursing bra with special expanded frames, softer and more flexible than usual, will suit you. A cup on such frames will not create pressure on the chest, while giving it a beautiful shape.

The FEST models have various types of internal parts (they are responsible for access to the chest):

— a cup with an inner detail in the form of a ribbon that will fix the shoulder strap during feeding (mod. 2433, 5238a «FEST»). At the same time, the cup opens the breast as much as possible during feeding, which is convenient for mom and baby and provides an important “skin to skin” effect, which, in turn, has a beneficial effect on the establishment of lactation;
— a cup with an inner part in the form of a triangle (mod. 2638, 2533, 1831a «FEST»): an option in which the chest is also quite open, the baby is easy to apply, but there is additional support from the side and bottom;
— a cup with a circular inner part (mod. 0233, 0933, 7033 «FEST») that fixes the breast during feeding and opens only the areola area. This option provides constant breast support even during feeding, it is convenient for applying on a walk or in public places, since it does not completely expose the mammary gland.

When buying a nursing bra, pay attention to the belt and straps: they should be wide enough to properly distribute the load on the back, neck and shoulders. In the models of TM «FEST», recommended by the Russian Society of Obstetricians and Gynecologists, for large sizes, extended straps with soft dubbing are provided that do not cut into the skin.

In terms of design, the choice of nursing underwear is practically unlimited. Among the TM FEST bras you will find both models in basic colors (beige, black, white), as well as in brighter melange colors and with original prints. The capsule approach makes it easy to choose a set and look beautiful from the first days after childbirth. Be beautiful with FEST!

Underwear «FEST» is recommended by the Russian Society of Obstetricians and Gynecologists.